A couple years gone in a puff of smoke! But I'm back and hardly recognize this place. (LJ) So writing; I've been doing a lot of it and for actual money. You can see it here: http://stamps.about.com/.

Dave Eggers plays a role in A Heartbreaking Work of Staggering Genius, though not as a character the like of those who Steinbeck seemed able to limn as easily as he might spit in a bucket. The agony that Eggers presents himself experiencing by simply being a man who wouldn’t back down from the challenges of his time is the complete opposite of Steinbeck’s people, who bent like reeds in the politically tumultuous world of the 30s and 40s. If AHWOSG were published now it is doubtful Eggers would maintain the same philosophic posture he did in the pre-9/11 culture of America.

When I visited Cannery Row – the location, not the book – in the 60s it was in search of such noble characters; Doc Ricketts et al. But what I got was quite different and what it was was the culture of the literary outsider, writers and poets mostly from Venice and SF, whose work was available for free on street corners and in little bookshops in the pre-gentrified, still beaten down and rusty seaport. It was a decade after On The Road, but to be sure it was the first generation of the spawn of the "holy goofs" and their old ladies. Some, like Cassady, were still along for the ride, even while at the wheel, and others, new voices like da levy, were about to make their own mark on their time through a unique and dangerous take on a society that was ill-prepared to deal with their kind and their ideas.

Howl and On The Road were the world changers for the outsiders or undergrounders, as they were quaintly known. Steinbeck, although the master of the gritty, realistic (if already somewhat corny) narrative was the acceptable world changer whose books you didn't have to hide from the powers that be i.e., your mother and the vice principal. Brautigan, Barthelme and others patched up that leaky lifeboat, which was soon discovered to include one who had somehow become a passenger; who would take the new form and turn it into his own commercial shtick, accessible to Mom and Pop America. And yes, Tom Wolfe was the man until Hunter Thompson came along like a powerful outsider hurricane to blow him away like he was yesterday’s papers.

"Verily, when the day of judgment comes, we shall not be asked what we have read, but what we have done." Thomas von Kempen

"The whole matter began, so far as I am concerned, with the historic and unprecedented Vermont floods of November 3, 1927. I was then, as now, an instructor of literature at Miskatonic University in Arkham, Massachusetts, and an enthusiastic amateur student of New England folklore. Shortly after the flood, amidst the varied reports of hardship, suffering, and organised relief which filled the press, there appeared certain odd stories of things found floating in some of the swollen rivers; so that many of my friends embarked on curious discussions and appealed to me to shed what light I could on the subject.

I felt flattered at having my folklore study taken so seriously, and did what I could to belittle the wild, vague tales which seemed so clearly an outgrowth of old rustic superstitions. It amused me to find several persons of education who insisted that some stratum of obscure, distorted fact might underlie the rumours.

The tales thus brought to my notice came mostly through newspaper cuttings; though one yarn had an oral source and was repeated to a friend of mine in a letter from his mother in Hardwick, Vermont. The type of thing described was essentially the same in all cases, though there seemed to be three separate instances involved—one connected with the Winooski River near Montpelier, another attached to the West River in Windham County beyond Newfane, and a third centring in the Passumpsic in Caledonia County above Lyndonville. Of course many of the stray items mentioned other instances, but on analysis they all seemed to boil down to these three. In each case country folk reported seeing one or more very bizarre and disturbing objects in the surging waters that poured down from the unfrequented hills, and there was a widespread tendency to connect these sights with a primitive, half-forgotten cycle of whispered legend which old people resurrected for the occasion."

From "The Whisperer in Darkness" H.P. Lovecraft Back in the late 90's I went to a Paterson NJ fundraiser for an Irish themed festival where the special guest was Malachi McCourt, younger brother of school teacher and Angela's Ashes author Frank. Malachi was always the sort of roustabout hard living one. I was looking forward to buying a drink for a Fenian friend, but alas, he was now a teatotaller and would only accept a club soda, which I was more than happy to procure for him.

Anyway, we shared in some blarney. (Spoiler -- Shockingly he was better at it than I, though I felt I had something to offer as I was an acquaintance of two arty types named Quinn and I'd actually: been to the Old Sod, where I'd not failed to kiss the Blarney Stone (it's cold); visited Yeats' tower (physically not that impressive -- historically, yes); immersed myself in James Joyce through visits to Kenny's Bookstore (RIP) in Galway; and drank enough Guinness to float a medium sized hooker. That's a boat. What the hell did you think I meant?

I later found out that I could have coasted on my Irish blood, passed down from my grandmother and not gone through all that effort to gain my bona fides, but it's all good. (My parents weren't big on the heritage thing and neglected to give me the lowdown on my family history until I was, oh, about forty. Better late than never, I suppose.) Anyway, at the end of the evening McCourt led those in attendance in a singalong of the song in the video, Wild Mountain Thyme and everyone was properly imbued with the spirit.

McCourt struck me as a wry sentimentalist: staunchly proud of his roots, yet not getting sappy about what is too often portrayed as the Paddy Culture, a ready-made commercial version of Ireland that plays well with the tourists, but to anyone willing to look a little deeper is obviously an oversimplification of a complex people and their situation.

BTW, the images in the video complement the song well.

The days of the rural rumination are over. No more E.B. White-like journeyman prose about feeding a humingbird filling three pages. No more Thoreau influenced epiphanies about the natural wonders just off the beaten sidewalk of your McMansion-lined streets. If Whitman were writing today his editor would tell him to "tighten it up". The reader in today's fast-paced world -- even if not an actual executive -- needs an executive summary, even for (or perhaps especially for) the leisurely country essay or rural rumination:

The rural mailbox, those metal Collossi that balance precariously on their pine and redwood posts in places like Bumslap Arkansas and Pilgrim Hat New Hampshire first came into use when mail order (practiced by the likes of Sears and Montgomery Ward) became a big deal through the institution of RFD (Rural Free Deliver).

Soon hix in the stix were ordering chix ("one gross (144) of living baby chicks, postpaid to your box: $5.49. Guaranteed most still alive.") and wicks. ("Whale blubber wax candles! Let your house and barn smell like the seaside vacation you've always dreamed about.")

When the country folks realized they already had enough chickens and need not order any more; and that eau de dead fish was not an aroma that improved much on the constant scent of manure wafting through the window from the lower 40 they began to order more exciting items like bags of marbles, BB guns -- to annoy the squirrels on their property -- and gingham, a fabric which they apparently used to make everything from curtains to underwear back in the day.

Today, the large and often unsightly mailboxes nevertheless do a yeoman's job accepting stoically and gratefully all of the modern world's useless and wasteful catalogs and flyers that clog our mail system. But all of that "junk mail", not to mention useless items ordered from Amazon and other mail-order retail behemoths, is the least of the rural mailboxes problems.

My own has been battered by passing snow plows so often that its post looks like this: / and the box itself looks like an oft-kicked deflating football as it forlornly has relinquished its noble pedestal-like existence at the top of its post to the gutter below, its demeanor that of the town drunk, with hangdog posture, head askew, with door hanging open like a lollygagging tongue, waiting pathetically for its next drink. ComicCon, 2009 --
I met Robert Culp. And for 3 minutes he was my friend. Of course, I'd known him all these years, though he didn't have the glimmer of an idea that I existed. It was going to cost me $15 to get proof that he was my friend. But many friends I've had have cost a lot more, one way or another.

Because for $15 he was posing with those who wanted to rub elbows with a celebrity. I'm not sure, but I think he insulted me when I admitted I'd no idea how my phone took a picture. I had come to ComicCon NYC from Vermont, where there's no immediate need to record the trees, lakes and wildlife on a camera phone.

"Bunch of idiots with these phones, don't know how to use 'em," he said as I handed my phone to his assistant. Was he talking about me? It was a general comment thrown out to those within earshot, so I decided not to take it personally. At another table Lou Ferigno signed for Hulk fans and various writers had lines of the faithful waiting to be anointed with one of their favorite scribes' autograph.

I told Culp that when I was in eighth grade a girl had said I looked like him. He looked at me like I was sort of crazy and said something under his breath that seemed to be in the "Really? I don't see it" category of response. With my $15 paid the assistant snapped the picture, Culp and I wished each other success in the future and that was that.

The picture is still in my camera phone, the phone service having been ended suddenly before I had a chance to send it to myself and blow it up for a cool momento. But I'll eventually learn how Bluetooth works and then I'll have a fine record of the day. Until then I'll have to satisfy myself with the tiny image I can bring up on my phone's screen. These damn phones really make me look like an idiot. 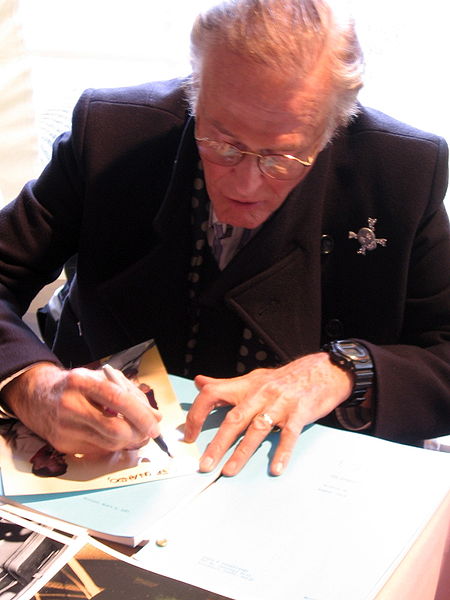